It's a slightly different sort of work day as I sit down to write this review. My power is out, the house is dark, and I'm outside on the deck with my laptop, phone as a hotspot, blogging and Slacking and what have you. But I'm fine, and excluding the distraction of a breeze and the nicer view, I'm still able to get my job done. In fact, the only reason I can is because of the subject of this review: The Aukey PowerTitan 300 and PowerHelio Y100.

I know this sounds like the premise for some marketing copy or sponsored content, but it's not. I'm just a blogger who took way too long to get around to reviewing this big battery I got sent in the middle of January. Of course, it was winter, and testing a solar panel in the snow sounded like an awful time to me, so I marked my calendar for an outdoor trip this summer and forgot about the hardware in my closet until the power was scheduled to be out for an entire workday. "That's right," I thought, "I have something for that."

This review is a 2-in-1, and I spent the better part of a whole workday (it was a Friday) tethered to both the PowerTitan 300 battery/power station/whatever you want to call it and the PowerHelio Y100 solar panels, turning the sun into enough juice to get some work done during a power outage. 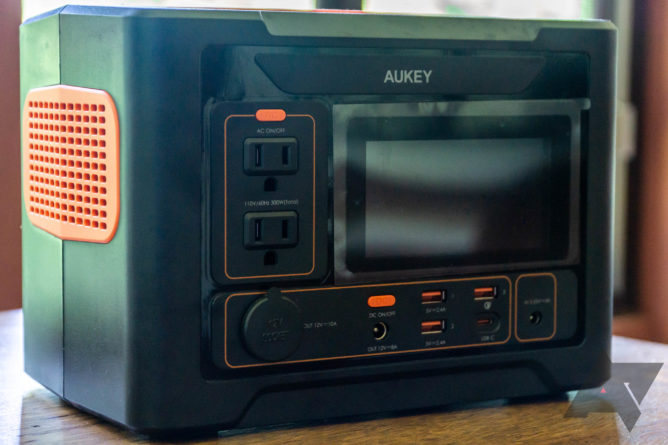 I'm not a big fan of the overall aesthetic of the battery, which looks more like construction equipment or a power tool than anything else, with a two-tone black and orange color scheme. Unarguably, it's less pretty than the snazzy retro-styled Aukey PowerStudio we reviewed last year. It's also surprisingly light considering its volume, which feels a little odd, but it will probably come in handy when you're on a trip. 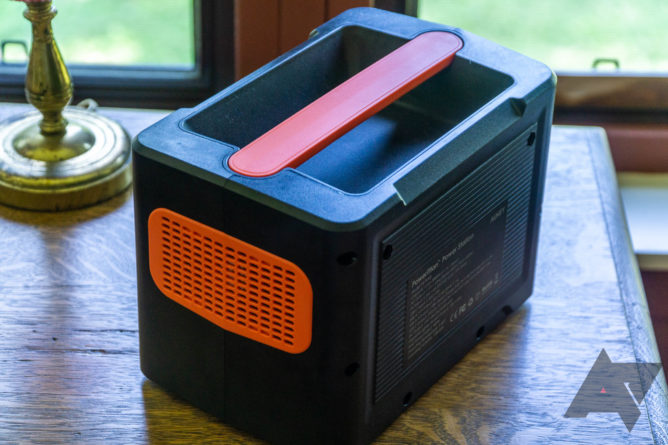 The PowerTitan 300 has quite a few inputs and outputs, though I wish it had more. You get a variable voltage DC barrel input, a USB Type-C port that can do input or output via PD, a pair of 110V AC outputs (300W/600W peak), two DC outputs in the form of a 12V barrel jack and a car cigarette lighter-style receptacle, plus a set of three USB Type-A outputs. That's a decent spread, but these days everything is switching to USB Type-C, and carrying multiple cables is a bummer. Aukey is hardly alone in having an insufficient number of Type-C ports, but I'd like 2+ of them in the future.

In anecdotal use, the battery performed well. I was even able to run my coffee grinder off the AC ports at breakfast, and keep an older laptop charged while working on my deck during that workday power outage. I also had a phone plugged in to serve as a hotspot. 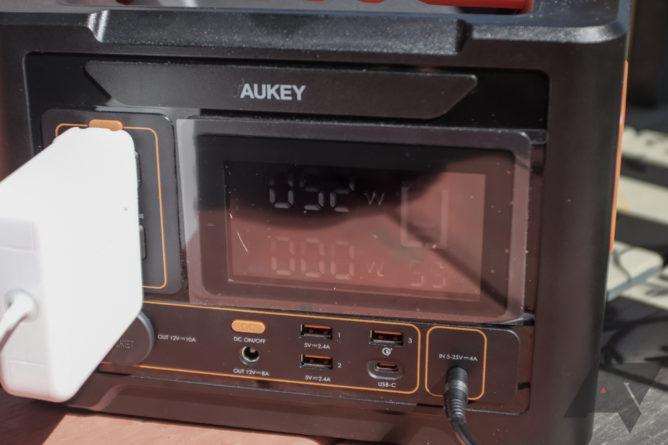 Hard to read outside.

I didn't observe any strange behavior with picky devices over either Type-C, Type-A, or the AC outlets, and the capacity rating seemed accurate in my testing, but the display can be a little dim outside — and, if you get the solar panel, you'll probably use it outside.

The only irregularities I will note is that the battery did get a little warm in direct sunlight while it was both charging at ~50W and discharging to my laptop via AC and a handful of USB devices. The fan could also be a little loud when it kicked in, though it never stayed on for long. 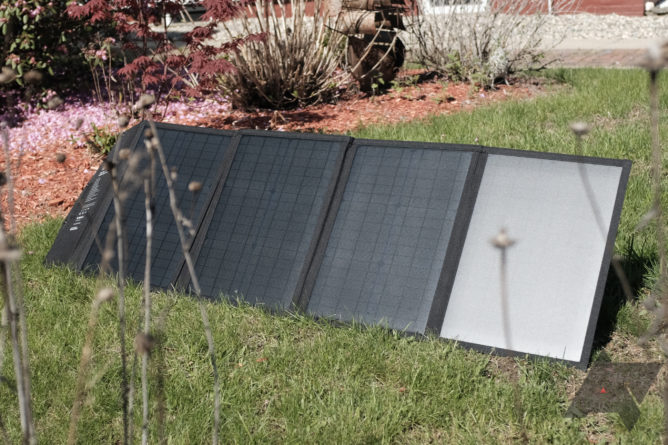 The solar panel is a simple folding design, with a nylon body and back, reinforced with big floppy kickstands behind most of the panels, all fastened together with velcro. There's a zippered compartment at one end that you can use to hold whatever cables you plan on using with it, and the various outputs live in a plastic box inside there, too. 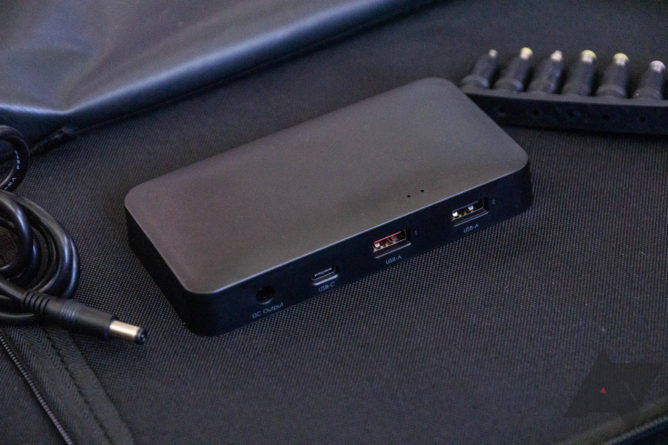 Though you might expect to just have a DC barrel output to connect to a battery, you can use the panels directly for power as well, with 2x USB Type-A and a USB Type-C port — the latter providing up to 45W via PD, which isn't too shabby. It also comes with 11 different barrel connectors in almost every size you can think of, so you can plug it into whatever weird gadgets you've got, and it's IP4X water-resistant. That means it should survive a bit of incidental lawn-watering — or, at least, mine did — but you wouldn't want to have it set up in a downpour. 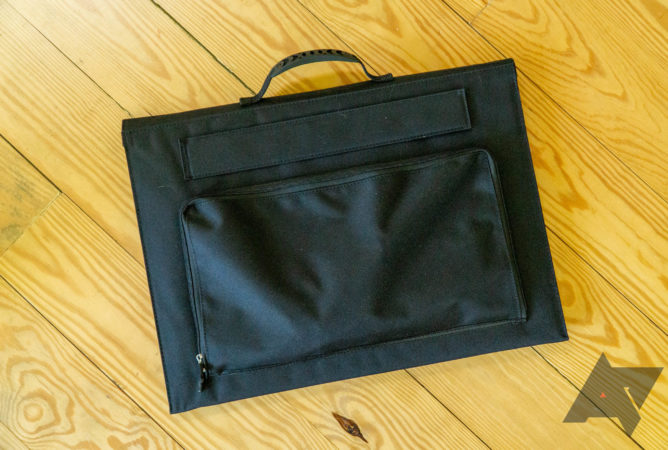 There were only really two issues I had with the solar panel. For one, I never even came close to reaching the rated output. On a super-bright and sunny day, with the sun shining squarely at the panels and trying every angle possible, I hit about 55W peak, according to the display on the PowerTitan 300. That is quite a lot less than the "up to 100W" claimed, though still more power than I needed at the time.

Should you buy it?

Yes, but with a few caveats. For one, even though there are much more expensive brands out there, this is still objectively a lot of money. The PowerTitan 300 runs $250 right now at the company's site (via discount). Unfortunately, in the wake of Aukey's Amazon reviews drama, the company's products were kicked off the retailer's site (delaying this review), and the $200 PowerHelio Y100 solar panel isn't even available for purchase now — though nothing is stopping you from using the power station with a different compatible solar panel. Just check that the inputs and outputs would be compatible. 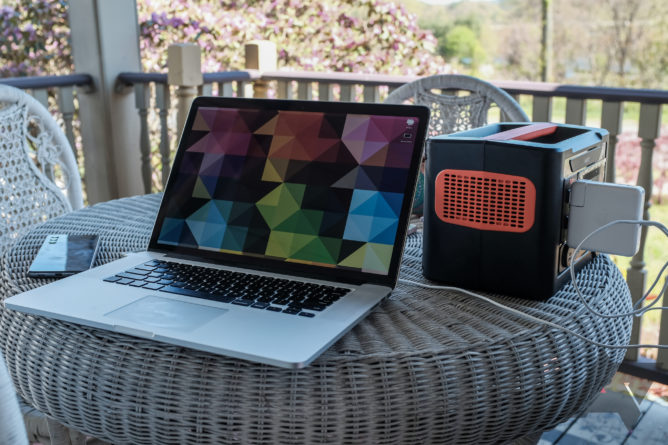 Comparing the PowerTitan 300 to most 300Wh Amazon specials, Aukey is charging a little bit of a premium compared to other even-less-well-known brands, which run closer to $200, but the Aukey does have one important feature many of them don't: pure sine wave AC. I won't dig too deep into the benefits of that, but many AC devices are designed for pure sine wave input, and it means things like stereos will have less interference, gadgets and appliances with AC motors in them will work better, and you'll have fewer potential compatibility issues or odd behaviors. It's not a necessity, but it is a benefit — you'll have to think about the stuff you plan on plugging into it and do a bit of research to know for sure if it's worth the added cost for you.

Folding solar panel kits also come cheaper, though most of the stuff from brands like Jackery are more expensive, and the designs aren't always as portable and compact as this. If you're hunting for a deal, though you can get a better MSRP, and Aukey's product does appear to be a white-label model. This nearly identical panel was $179 before Aukey was kicked off Amazon, but at the time of posting it has ballooned to $236. 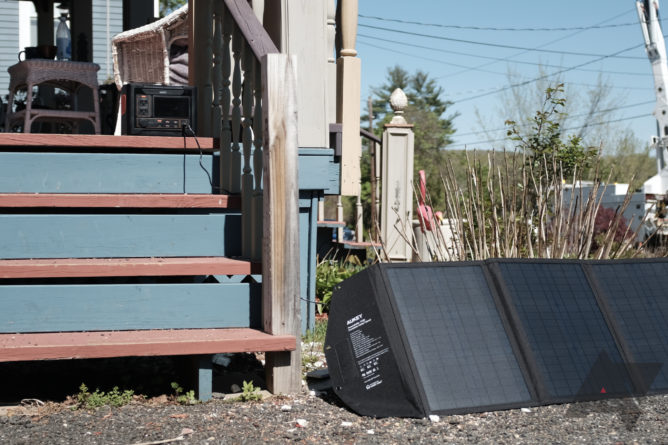 I honestly don't think most of our readers will regularly need a setup that's this capable, and a cheaper battery and smaller solar panel will get the same job done if you're doing something like camping with just a laptop or a tablet — and they'll be a lot more portable, too. But if you're like me, and you live out in the country where the power goes out way more often than you'd like, or if you're big into van camping or tailgate parties, having something like this gives you a lot of flexibility.

If you do decide to get one, Aukey gave us a coupon code good until July 31st that brings the price down a bit: AUKEYPLUS reduced the PowerTitan 300 to $209.99, and drops the price of the more expensive PowerZeus 500 (which we did not review) to $366.98.